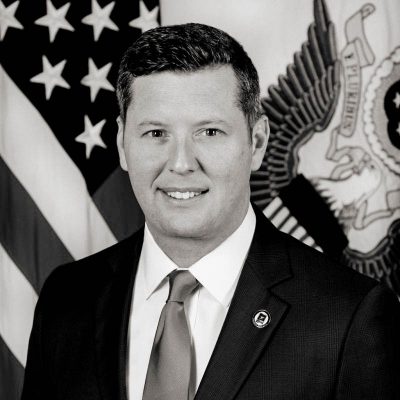 Secretary Patrick J. Murphy is a Vetrepreneur, Board Chairman & Leading Voice of the 9/11 Generation. Secretary Murphy was America's first Iraq War veteran elected to the U.S. Congress & the 32nd Under Secretary of the US Army, and is now a Commissioner on the US Cyberspace Solarium Commission & Senior Managing Director Ankura. Passionate about entrepreneurship and his brother & sister Veterans, Secretary Murphy is co-Founder of Work Merk, the winning-habits company, Founder of Taking the HillLLC, an Emmy & CLIO winning strategic engagement and film company, and invests in his fellow Vetrepreneurs through Stony Lonesome Capital, a boutique venture capital firm. Secretary Murphy serves on several corporate and non-profit boards to include: BAE Systems, Director; Cerner, Chairman Government Services; Adobe, Member Federal Advisory; Homes for Our Troops, Director; and several other privately-held companies.

As the 32nd Under Secretary of the Army and Acting Secretary, he led the management and operation of the Army—a Fortune 2-sized organization and the Nation’s second largest employer with over 1.3 million Soliders & civilians, and a budget of $148+ billion. His focus transforming a more innovative and diverse workforce led to an expansion of the Soldier for Life initiative, saving the Army $340 million in 2016, and reaching recruitment goals for the first time in five years with over 120K ‘Gen Z’ Americans hired, 36% People of Color including the most diverse graduating class in West Point history. Secretary Murphy facilitated unprecedented public-private partnerships generating over $250 million in taxpayer savings, from Major League Baseball to 20th Century Fox. His aggressive and authentic use of social media to tell the Army story helped lead to an 18% growth across all platforms.